Mark: Hi Gina, how are you and Michael doing? You look great!

Mark: Well, it seems like you're handling everything okay.

Karen: Ha! Maybe it looks like that on the surface... but I'm so stressed out! I had no idea how much work kids are!!

Mark: Well, just let me know if you need a break. Sue and I would love to babysit, and you and Michael can take a night off.

Karen: Thanks so much, Mark!

Barbara: Is it what you expected? 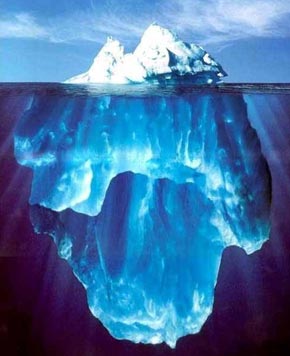 John: Of course not! (laughs) You know there's always more than what you see on the surface... I have a lot more responsibilities than I thought I would have!


Meaning: at first glance, outward appearance (there is more than what you see in the beginning or on the surface)

In Example 1, Mark thinks Gina looks great--but really she is stressed out because she's so busy with two small children!

In Example 2, John explains to Barbara that there is a lot more for him to do at his new job than he thought at first.

The idiom "on the surface" was taken from Unit 10 (L.A. vs. N.Y.C.) in LSI's textbook Reading Transitions for Level 4 Reading/Vocabulary classes.
Posted by Anonymous at 4:14 PM No comments:

Jerry: Hey Ryan! So... how's it going with the new girl at Starbucks? Have you asked her out yet?
Ryan: No, not yet... It's hard to talk to her at work, but I think she knows I like her!
Jerry: Man, are you waiting for her to make a move? Ryan: Haha! Very funny! Actually, I don't like it when a woman asks me out the first time.
Jerry: Why not? Are you old-fashioned? If a woman makes a move, you know she's really interested.
Ryan: That's true, I guess--I just feel more traditional about asking someone on a first date.
Jerry: Well, don't wait too long, Jerry--or some other guy might make a move first!

Cynthia: Hmm, I don't know all the chess pieces yet....

August: There's only one way to find out. Try one and you'll learn as we play.
Cynthia: Okay, I just have to protect my King and Queen, right?
August: Exactly! And white goes first. I'm black, so you make the first move.

Meaning: to try to start a romantic relationship with someone, to try to advance your position


In Example 1, Ryan likes a woman who works at Starbucks, but he's a little afraid to make a move and ask her out on a date. His friend, Jerry, is pushing him to just go for it.
In Example 2, August and Cynthia are playing a game of chess, but Cynthia has never played before. She doesn't know how to make a move with her chess pieces to start the game and advance.
Usage notes: We make a move when we want to advance our position. We can make a move to try to get a promotion at work, win a game, and start a relationship with someone.
The idiom "make a move" was taken from Unit 9 (The Speed of Romance) in LSI's textbook Reading Transitions for Level 4 Reading/Vocabulary classes.

Posted by Anonymous at 7:24 PM No comments: