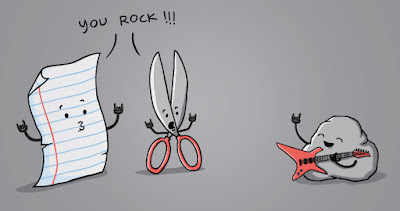 Freddie: I’m going to organize the biggest party of all time.
Mick: Dude, you rock!  When is this party going to take place?
Freddie: We’re going to rent an entire farm and set up a massive sound system that all the neighbors will be able to hear.
Mick: Wow! You’re really putting on a show.

Meaning: "You rock" is an expression used to show strong approval.  Since Rock N’ Roll is a popular genre of music, it is an expression going back for some time.  However, it’s still popular in use.

John: Hey man, do you think you can have that work done by the end of the day?
Paul:  I completed that work last week.  I can have it on your desk in a minute.
John:  Fantastic! You rock!  I can always count on you.
Paul:  Thanks.  I really appreciate your comment.

Meaning: In this instance, “You rock” is also used for approval, but it can also be used as a cheer from excitement. 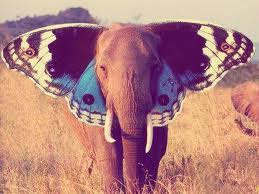 Nancy: What are you wearing for the costume party?
Marco: I’m going to wear a bear hat, a penguin coat, and cheetah pants.  I’ll be the weird one of the party.
Nancy: You’re really going to let your freak flag fly, huh?
Marco: Thanks.  You know me; I’m always trying to be fun.

Meaning: "Let your freak flag fly" is a positive expression used to show a characteristic that’s hidden or overt implying a unique or unconventional way of thinking.  Some people feel that the work “freak” might be a bad thing, but in this instance, it’s a show of approval.

Barbara:  What do you think about my idea for the holiday party we all wear our clothes inside out?
Tom:  I’m not sure.  That seems a little crazy.  Don’t you think?
Barbara:  Oh, come on!  Let your freak flag fly!  Not everything has to be formal in life.
Tom:  You know what?  You’re right.  We should have a little fun in the office every now and again. 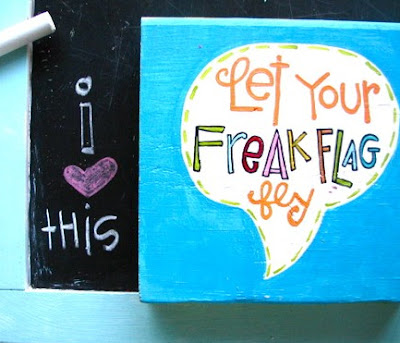 Meaning: In this instance, “Let your freak flag fly” is used to show a unique way of thinking, that although may seem strange, can be a positive thing.  Here Barbara is just trying to create a fun atmosphere for the day.  It doesn’t necessarily mean it’s a permanent condition or thought.

To Shoot the Breeze 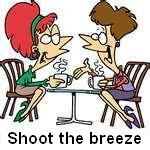 Meaning: Chat or talk to someone in a very casual, fun way

Context #1 – Two students are talking about going on Spring Break

Jaffer:  I can’t wait until the end of this term! I really need a break from studying.
Katrina: I know. It’s nice to take a break from school every now and then. What are you planning on doing?
Jaffer: Nothing. I just want to sleep all day, sit around, and shoot the breeze with my friends. I won’t even open one of my textbooks. I can’t wait!
Katrina: Me, too! I’m just going to be shooting the breeze and having fun!
Jaffer: Well, have a good one!

Simon: Did you see Kevin today? Unbelievable!
Pete: Huh? What do you mean?
Simon: He was over there at his desk just shooting the breeze with Jasmine. I don’t think he has worked even one minute today.
Pete: .Really? But Kevin is always such a good worker and finishes everything on time. Are you sure he wasn’t just helping Jasmine with her work? He just doesn't seem like the type to sit around and shoot the breeze with people at work.
Simon: Ha! Believe me, that wasn’t work! He was just sitting there enjoying their little chat without any concern about the tons of work everyone has to do.
Pete: Well, I’m sorry to hear that. Maybe he just didn’t feel like working today.

Meaning: “To shoot the breeze” means to talk or chat with someone in a very casual manner. In context 1, Jaffer isn’t going to go anywhere for his break. He just wants to “shoot the breeze” and hang out with his friends. In context 2, Simon is angry that Kevin is just sitting around and chatting with Jasmine instead of working. 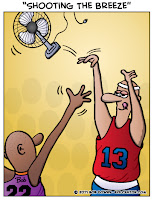 http://www.languagesystems.com/
Posted by Michelle at 9:00 AM No comments: 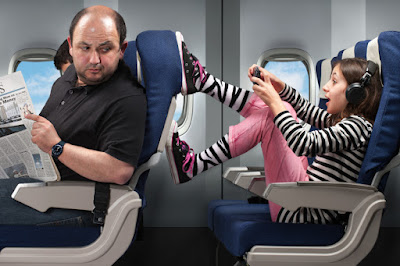 Meaning: To annoy or bother someone

Context #1 – Two students are talking after class
Jackie: You know that girl in the red shirt who sits in back of the class?
Pippy: Hmmm…let me think. Oh, yes! The really tall girl.
Jackie: Yes, that one! She bugs me so much!
Pippy: Really? Why?
Jackie: She just taps her pen on the table all through class. It’s a constant “tap, tap, tap.” I can’t stand it! I just want to tell her, “Stop bugging everyone with your constant tapping!”
Pippy: Calm down, Jackie! First of all, I think you are the only one who can hear the tapping because you sit right in front of her. Second, if you don’t like the constant tapping, just change where you sit in class.
Jackie: I guess you’re right. It still bugs me though. How rude!

Context #2 – Two students are walking in the hallway after English class
Simone: Oh my gosh! Let’s walk the other way. That guy always bugs me after class.
Pete: What’s going on? What guy?
Simone: The guy from our English class. He keeps trying to talk to me and ask me to go out with him. I don’t want to go. He’s nice, but not my type.
Pete: Just turn around and tell him, “Don’t bug me anymore!”
Simone: Ha, ha. You know I can’t be that rude. Even though I don’t want to talk to him, he seems like a nice person. I don’t want to hurt his feelings.
Pete: Well, I guess you had better get used to people bugging you!

Check out this video. Does it bug you?

Posted by Michelle at 9:00 AM No comments: