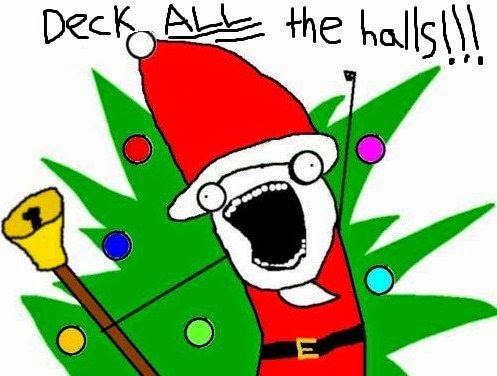 Example 1:
Jennifer: (singing) Deck the halls with boughs of holly, Fa-la-la-la-la, la-la-la-la!
Olaf: What? I don’t understand a word you are singing!
Jennifer: It’s an old Christmas carol, or song, Deck the Halls!
Olaf: What does it mean?
Jennifer: Well, “deck the halls” means to decorate for Christmas. A bough is a branch, so they are hanging up branches of holly.
Olaf: Ummm, what is holly?
Jennifer: Oh, it’s a type of flowering plant, usually with green leaves and small red round berries.
Olaf: I see those everywhere at Christmas time. Teach me the song!

Example #2 – Two roommates are talking at home
Jack: This neighborhood is gorgeous. Look at all the Christmas lights.
Terri: I know! Every single house is decorated with something unique. It’s a beautiful sight.
Jack: Hey, I heard that Carlos is moving to this neighborhood with his new wife next year.
Terri: Well, they had better be prepared to deck the halls and a whole lot more at Christmas time!

Meaning: “Deck the halls” comes from an old Christmas carol, or song, and it simply means to put up decorations at Christmas time.  @SBLA @OC @NELA @DTLA

Example 1: A mom and her small son are talking about the holidays.
Jeff: Wow! Look at all these presents under the tree!
Mom: Well, tis the season!
Jeff: But it’s still early, a week before Christmas. I thought Santa Claus brought all the presents while we are sleeping on Christmas eve?
Mom: Ummm...Santa.......ahhhh....came early this year. Surprise!
Jeff: Really?
Mom: Yes, really. Because you were such a good boy!

Example 2: Two roommates are talking at home.
Jack: OK. I have my ugly sweater, antlers, exchange gift, and egg nog. I’m ready for the Christmas party!
Terri: Ha! You really look like you’re ready! I like the antlers!
Jack: Tis the season.....to party!!!!

Meaning: “Tis the season” typically refers to the time before Christmas, which can be defined as anywhere from October to December 24th. @SBLA @OC @NELA @DTLA

Posted by Michelle at 9:08 PM No comments: