To Squirrel Something Away

Idiom: To squirrel something away; used as a verb

First Example:
Kyle: I bought a car!
Elizabeth: Really?  How much are your monthly payments?
Kyle: I don't have any.
Elizabeth: What?! How?
Kyle: I've been squirreling away a little money from each paycheck for years, and it saved up over time!  When my last car started having problems, I checked my savings and realized I had enough to buy a used car.
Elizabeth: Great! Then you can drive to lunch!

Meaning: The idiom "to squirrel something away" is used to describe the act of saving or hoarding for a future, similar to how squirrels save nuts for the coming winter. The most common use of the expression is used to describe saving money over a period of time, as in the example above, when Kyle explains that he has been squirreling away money for years. This means he has been saving small amounts of money over the years, intending to use it at a later time. While the idiom is primarily used for money, it can be used in other ways, as in this example:

Carlos: It's November. I guess it's time to start thinking about Christmas shopping.
Ronda: Oh, I'm already done.
Chris: No way.
Ronda: Yep.  I start shopping for Christmas the day after. I keep an eye out for potential gifts at great prices year round. There are so many great sales early in the year. Then I squirrel them away until December so that I don't have to rush when the holidays approach and everyone else is going nuts.
Chris: Wow. So you're saying the gift you give me this year was probably bought in January?
Ronda: Who said you're getting a gift?  I'm just kidding. But I think I bought your gift in March.

Meaning: In this example, Ronda explains that she squirrels away Christmas gifts that she buys on sale throughout the year. @SBLA @OC @NELA @DTLA

www.languagesystems.edu
Posted by John Clark at 8:58 AM No comments:

Email ThisBlogThis!Share to TwitterShare to FacebookShare to Pinterest
Labels: Christmas shopping, hoard for the future, LSI everyday idioms, save for the future, start shopping early, to save money over a period of time

To Serve Your Country

Idiom: To serve a/your country; used as a verb 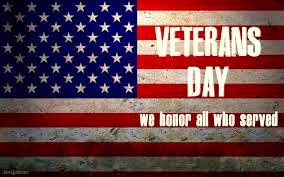 First Example:
Announcer: For Veteran's Day, the president honored the men and women who have served our country.  He thanked the military members for their service in a speech given at Arlington National Cemetery.

Meaning: The idiom "to serve a country" is used to describe someone who is enrolled in the military.  The expression is used to emphasize the sacrifice that being a member of a military can take on those who have served. In the example above, the president is honoring military members who have served their country on Veteran's Day, a special day to commemorate those who have done military service.  Normally, most individuals "serve" their own country, so this idiom is often used with a possessive adjective, as in the example ("our" instead of "a"). Here is another example:

Chris: I heard you're joining the navy after you graduate?
Tammy: Yep.  I start next month.
Chris: Really?  Are you doing it to help pay for college?
Tammy: Not really. I mean, that's certainly a benefit, but it's not my primary reason. Ever since I was a little girl, I've always wanted to give back, and serving my country seems like the best way to that.
Chris: That's cool.

Meaning: In this example, Tammy is joining the Navy.  When Chris asks if she is doing it to help pay for college (there are programs that pay for US veterans' higher education), she says the she has wanted to give back to her community since she was a little girl, emphasizing that her service is primarily altruistic (doing something for others) rather than self-serving (receiving benefits in this case). @SBLA @OC @NELA @DTLA

Posted by John Clark at 2:17 PM No comments:

Email ThisBlogThis!Share to TwitterShare to FacebookShare to Pinterest
Labels: Arlington National Cemetery, be a member of the military, enroll the military, join the Navy, to serve your country, Veteran's Day
Newer Posts Older Posts Home
Subscribe to: Posts (Atom)