To Tell a White Lie 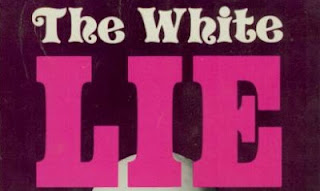 White lie – noun; a lie that won’t hurt others. “White lie” is usually used with the verb “to tell.” A white lie is often told to a person who does not want to hear the truth or will be negatively effected by the truth.

Jane: Look at this dress! I love the way the orange stripes match my blue eyes, don’t you?

Eriko: Ah, sure. Orange and blue look lovely together.

Eriko: No, but she really thinks so. It was just a little white lie. The truth might hurt her feelings.

Jane: I’m back! It feels fantastic! And it looks great! Tom, what do you guys think?


* From Speaking Savvy, which is used as the speaking/listening textbook for level 5…
Posted by Ligia at 2:19 PM