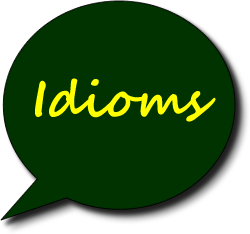 First Example:
Scott: What do you plan on doing after you graduate?
Ernest: Well, my next step will be to go to graduate school and get a Master's degree in International Relations.  My eventual goal is to go into politics.
Scott: Are you hoping to work in local government?
Ernest: Actually, my dream is to become a U.S. Senator.
Scott: Wow, you've set your sights pretty high!  I didn't realize you were so interested in politics.
Ernest: Yeah, ever since I was a kid, I've wanted to do something to help make the world a better place, and politics seems like a good way to do that.

Meaning: When people "set their sights high," it means that they have goals that others might consider difficult to achieve.  The "sights" in the expression is what the person is looking to achieve.  In the example above, Ernest has set his sights on a political career, with a position as a Senator his eventual goal.  The expression can also be used with the word "low" in a similar way, as can be seen in the following example:

Ernest: What about you?  What do you plan on doing after graduation?.
Scott: I actually don't have any plans yet.  I think I might just find a job as a bartender and give myself some time to figure it out.
Ernest: Well, if I set my sights high, it sounds like you're setting your sights too low!  You're one of the smartest guys I know, and you have really good grades.  Why aren't you looking into graduate school?
Scott: I'm kind of tired of education right now, and I'd like to take some time off.  But I don't plan on staying away forever; I just want to take a year off and consider my options.

In this example, Ernest is telling Scott not to set his sights low after graduation.  Ernest thinks Scott should aim for more than a bartending position.  Notice that the word "too" is being used to emphasize "low," which is common with this expression (especially in warnings with a negative, as in "Don't set your sights too high," which means "Don't expect too much, or you will be let down.").

This idiom is from LSI's new edition of "Reading Horizons," which will be used in the Level 6 Reading classes. For more information, please visit http://www.languagesystems.com/
Posted by John Clark at 10:44 AM