Take A Toll On / Take Its Toll On 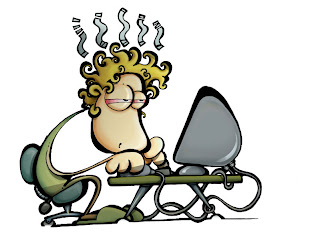 Idiom: to take a/its toll on; used as a verb

Sharon: Wow, you've been working late a lot lately!
Geoff: Yeah, and it's beginning to take a toll on me.
Sharon: What do you mean?
Geoff: Well, I've been really stressed, and my health is getting worse because I haven't been going to the gym or getting enough sleep. I've gotten sick twice in the last two months!
Sharon: Wow, maybe you should take some time off.
Geoff: I'm planning on it, once I get this report finished.

Meaning: When something "takes a toll on" something, it means that the subject is having a negative effect on the object of the idiom.  Usually, the idiom "take a toll on" is used when a person or thing has been doing a certain action a lot, and that action is starting to have a negative impact on the person or thing doing it.  In the example above, Geoff has been working late a lot, and the extra time at work and stress is having a negative impact on, or "taking a toll on", Geoff's health.  The expression can be used with the word "a" or "its" interchangeably, so the example above could have also been "Yeah, and it's beginning to take its toll on me" without a change in meaning.  Look at another example involving an object that is being affected:

Michael: I need to get a new car.
Jennifer: I thought you said you would never get rid of that BMW?
Michael: Yeah, I love the car, but traffic is really beginning to take its toll on the engine.  I've broken down twice in the last month, and there's a weird sound coming from under the hood.
Jennifer:  How old is the car?
Michael: It's from 1972, and it was great when I drove short distances, but I don't think it was made for sitting in traffic.  Hopefully I can find a collector who wants to restore it.  Then I can use the money as a down payment on something a little newer and more reliable.

In this example, Michael says he needs to get a new car because the traffic is "taking its toll" on his current car.  He thinks sitting in traffic is having a negative effect on the older car, so he is thinking about selling it and buying something newer.  Notice that Michael used "its" instead of "a" in the idiom (although "taking a toll" would also be technically correct in this instance).

This idiom is from LSI's new edition of "Reading Horizons," which will be used in the Level 6 Reading classes. For more information, please visit http://www.languagesystems.com
Posted by John Clark at 11:14 AM