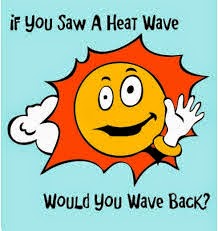 Context #1 – Walking in LA during a heat wave
The temperature is 105 plus degrees Fahrenheit (40 degrees Celsius), and it feels like you just stepped into a huge oven. It's the hottest it's been in recent memory. You just passed a homeless guy who was trying to fry an egg on the sidewalk. There is air conditioning in just about every place you go, except your apartment because you don’t have an air conditioner. You are desperately looking for a place to cool off until the sun goes down. Just staying outside for an extended period of time could be bad for your health. It is difficult to move and EVERYONE is cranky because of the hot weather. You are experiencing a HEAT WAVE....

Context #2 – Two roommates in an apartment without air conditioning during a heat wave
Jennie:  I cannot even believe how hot it is right now. It’s like I’m in hell and there is no end in sight.
Katie: I know! I can’t even breathe. I feel like I’m in an oven. I had no idea there could be a heat wave like this in California.
Jennie: We really should have rented an apartment with air conditioning. I just didn’t think we would need it.
Katie: Well, we are going to melt if we stay in this apartment any longer. Why don’t we go see a movie? It’s always nice and cool in the movie theater.
Jennie: That sounds like a plan. Maybe it will cool off later after the movie finishes.
Katie: I doubt it! Mrs. Cline our neighbor says that she cannot remember a heat wave like this and she has been living in California her whole life!

Meaning: “Heat wave” is an idiom that is specifically used to talk about a period of time that is much hotter than usual. In context #1, it describes a person experiencing a heat wave while walking outside. In context #2, the roommates are in their apartment, but they don’t have air conditioning, so they are trying to find a way to stay cool.  @LSILA @LSINE @LSIOC @LSIS 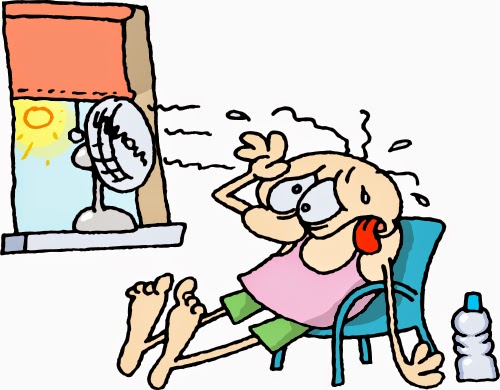