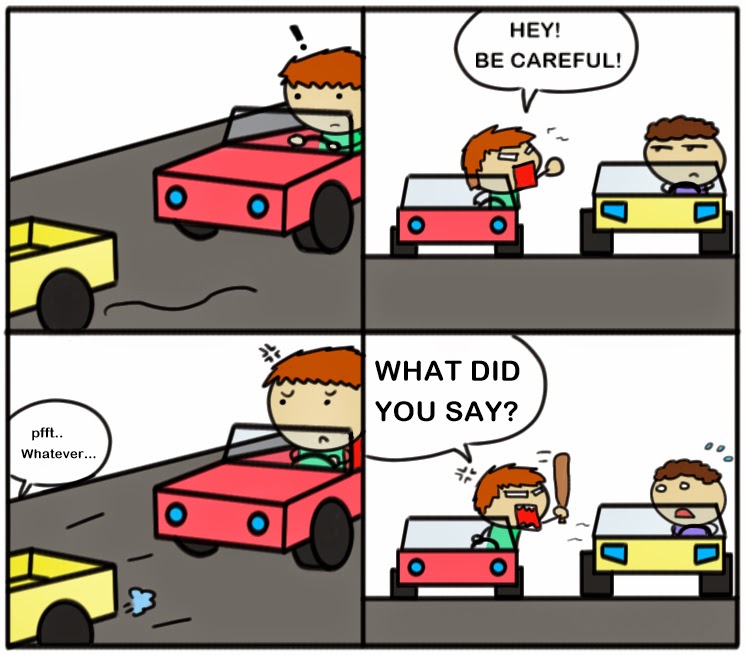 Example 1 (On the road)
Robbie: Watch out, Sarah! You almost hit that car in front of us!
Sarah: Oh my gosh! I didn't see it! Oh no, it looks like he's slowing down but why?
(Other driver gives Robbie and Sarah the middle finger and is shouting something at them from his car)
Robbie: Wow! That guy needs to calm down! He has a serious case of road rage! And Sarah, you need to drive more carefully.

Example 2 (News Report)
There was a terrible incident of road rage late last night on the 110 freeway in Los Angeles. A local man lost his life when an enraged motorist stuck him with his vehicle after a minor traffic accident. Police are still investigating.

Meaning: Road rage is extremely aggressive behavior by a person driving a car or other road vehicle. Road rage includes rude hand gestures, shouting, unsafe driving, purposely blocking or hitting another vehicle, throwing things at other drivers, getting out of the car to fight, and has even resulted in death.

www.languagesystems.edu
Posted by LSI at 10:41 AM

Email ThisBlogThis!Share to TwitterShare to FacebookShare to Pinterest
Labels: aggressive behavior, blocking a vehicle, getting out of the car to fight, hitting another vehicle, road rage, rude hand gestures, shouting, unsafe driving