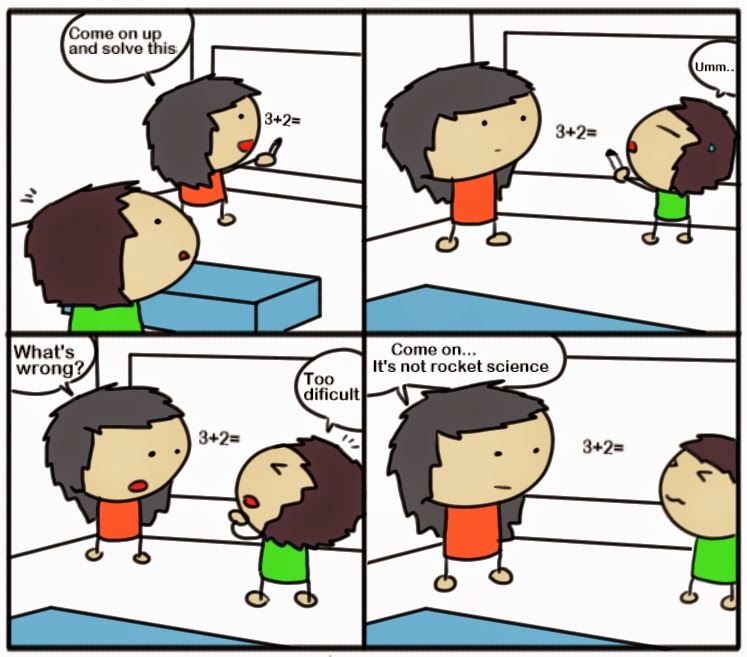 Context #1 – Two friends are discussing the effects of illegal drugs
Lars: You know, I don’t agree with what the professor said in class today.
Katrina: Hmmmm? About what?
Lars: He said that drugs are the biggest problem in our society today.
Katrina: Well, they are really bad, especially for younger people.
Lars: What about crime? I think that is the biggest problem today.
Katrina: Drugs equal crime. It’s not rocket science! The connection is really clear.
Lars: Oh, I never thought of it that way.

Context #2 – Julia is planning a party for her 6-year-old sister
Julia: Oh, I’m so nervous!
Tito: Why? What’s up?
Julia: I have to plan a birthday party for my little sister. She is turning 6 years old. What should I do?
Tito: Come on! It’s not rocket science! It’s a party for a 6 year old girl. How difficult can that be?
Julia: Well, I want her to have fun!
Tito: Buy a cake, balloons, and presents. Then invite a bunch of her friends over and play some games.
Julia: Well, maybe they want to do something more than that. Maybe I should bring someone in to do their make up and nails. Wouldn’t that be fun?
Tito: They are 6 year-old girls. I think games, presents, and cake should be enough.

Meaning: Something that is not very complicated or difficult to understand
“People use this idiom when they want to describe something that is simple and easy, not complicated. It is usually used in the negative. Instead of saying “it’s not rocket science,” you can also say “it doesn’t take a rocket scientist!”

www.languagesystems.edu
Posted by LSI at 9:13 AM