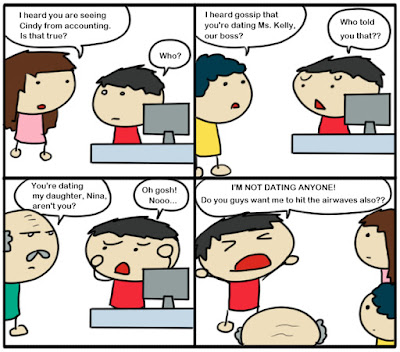 Giorgio: I am nervous. My band just finished its first CD. Now we have to promote it.

Giorgio: So we are getting ready to hit the airwaves and start promoting it. We have an interview on “Coffee with the Girls” this afternoon. It’s a local TV show and it has a large following in this area.

Samira: Oh, I’ve seen that show! They have a lot of bands and singers as guests. That is so exciting!

Giorgio: Yes it is, but I’m also nervous because we are going to play a single from the CD and then they will interview us afterwards. It’s a live show, so I don’t want to make any mistakes.

Samira: Well, if you want to become famous, you have to hit the airwaves to promote your band. Don’t worry! You will be just fine.

Giorgio: Thank you for the encouragement, Samira!

Lilith: Quick! Turn on the TV to channel 4!

Lilith: Do you remember that woman who had an affair with the mayor a few months ago? Myra Johnson?

Liam: Oh yes. Didn’t she disappear? No one has heard from her since the mayor confessed to the affair on TV and apologized to everyone.

Lilith: Yes, and the mayor blamed Myra Johnson for everything! Well, now Myra is hitting the airwaves with her side of the story.

Liam: Wow! Good for her. She shouldn’t be blamed for everything. I want to hear what she says.

Lilith: Me, too. Look, it’s starting!

Meaning: to go on radio or TV to promote something or to tell one side of a story.