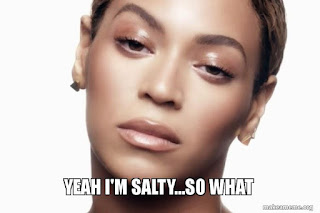 Janette: Hi, Anne. How are you doing?
Anne: Who wants to know?
Janette: I'm just asking how you are.
Anne: So what?
Janette: Hey, don't get salty with me just because you are having a bad day! I didn't do anything.
Anne: I guess you're right. Sorry. Mondays suck.

Explanation: Janette was having a bad day and was acting angry and being rude to her friend. Her friend told Janette not to "get salty" or "be angry/rude" with her because she didn't do anything to cause Janette's anger.

Situation #2: Two co-workers talking about their boss after work
Bill: I can't believe I made it through the day!
Sandi: I know! Fred was so salty today. I couldn't even look at him.
Bill: What was his problem anyway?
Sandi: Well, I heard that he thinks everyone is being lazy at work and not putting in the amount of time he expects.
Bill: That may be true for a few people, but not everyone. I certainly put in a lot of time and often work late.
Sandi: Me, too. But I don't think he sees us working hard. He only sees the lazy people. That's why he is always salty at work.

Explanation: Fred, the boss, is salty because he thinks everyone at work is lazy. This means he is irritated and angry with his employees. 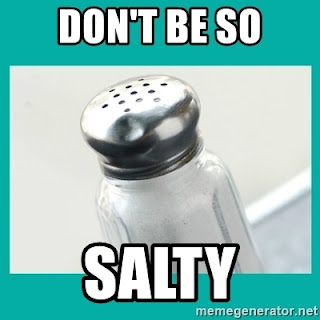