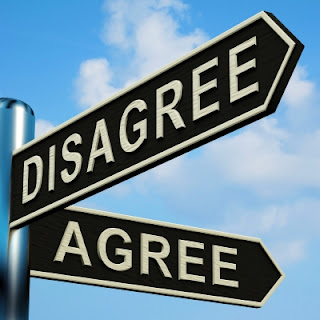 Idiom:  Agree to Disagree; used as a verb.

Sam and Mary just had an argument on the topic of which came first, the chicken or the egg.  According to Sam, since eggs come from chickens, it is natural to assume that the chicken came first.  However, Mary pointed out that all chickens are born from eggs so she believes that eggs came first!  Both Sam and Mary refused to agree in this particular topic.  In the end, they both agreed to disagree with one another.

Meaning:  Agree to Disagree means to calmly agree not to come to an agreement in a dispute.  In this example, Sam completely believes that the chicken first appeared before the egg.  However, Mary strongly felt that the egg came first.  Because they were both unable to convince one another, they both agreed that they could not ultimately come to an agreement.  This idiom can apply to any situation where two individuals are unable to agree on a particular point.  This idiom is used as a verb in this example.

This idiom is from the LSI book "Speaking Transitions," which is used as the primary textbook in LSI’s Level 4 ESL Listening/Speaking classes.

For more information, please visit http://www.languagesystems.com/
Posted by Unknown at 11:23 AM