Afraid of One's Own Shadow 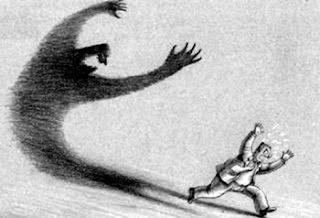 Example 1:
Mark: Are you OK, Sandra? You look worried about something.
Sandra: Oh, hey Mark. I didn't see you there. I've been a little more anxious these days. I can't seem to relax.
Mark: Did something happen?
Sandra: I had a car accident recently. It was pretty bad. Since then, everything scares me. I'm even afraid of my own shadow!
Mark: Well, it will take some time to feel normal again. At least you still have your sense of humor!

Example 2:
Betty: Hey, Jane. I heard you broke up with Steven. I thought you two were getting along. Did something happen?
Jane: No, nothing happened. We got along just fine, but it always bothered me that he was a little too wimpy.
Betty: Wimpy? What do you mean?
Jane: He wasn't very strong or brave. Last week, someone took a parking spot from us when we were clearly next in line! He didn't do anything! Then, I needed help moving some furniture at home and he tried to help me, but he couldn't lift the dining chair. He's a nice guy, but honestly, he's afraid of his own shadow. I like scary movies, roller coasters, adventure, and excitement! I think he'll have a heart attack if he spends more time with me.

Explanation:
If someone is described as being afraid of his/her/their own shadow,  it can be said that they get frightened very easily by things that wouldn't normally scare someone. Your shadow is generally something that doesn't frighten you because you understand that it is harmless.
In Example 1, Sandra is emotionally and mentally recovering from an accident. She's understandably still unsettled after her accident, but she jokes that her shadow even frightens her.

In Example 2, Jane felt that Steven was too afraid of things that, in her opinion, shouldn't scare a person. So she ended their relationship.

For more information please languagesystems.edu
Posted by LSI at 3:29 PM