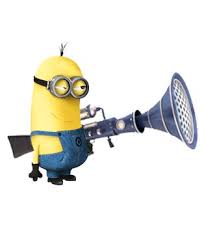 Nick: Who’s going to play on your basketball team for the tournament?
Ben: We have Michael taking the lead.
Nick: Oh! You’re bringing out the big guns.  You really want to win.
Ben: What’s the point of playing if you don’t have a strong leader that plays well?
Nick: That’s true.  We don’t have big guns on our team, just good team players.
Ben: Hey, that’s not bad.  You can’t depend on one good player only.  The big guns should only complement the team.

Julia: Hey, are you hosting the party this Saturday?
Tom: Yes.  I’m going to bring out the big guns and have a live band.
Julia: Oh cool.  You mean no DJ?  Just live music?  Who’s playing?
Tom: My friend’s brother is the lead singer of Green Day.
Julia:  What? That’s definitely the big guns.  No one will forget your party.

Meaning: The expression "big guns" refers to an important person in an organization or something/someone that has strong influence or value.  For example, Nick said to Ben that because Michael is playing, he’s bringing in the big guns.  He recognizes that Michael will make a big difference in favor of Ben’s team.  He can add value or strong competition for the team.
By Carlos T. #NELA
http://www.languagesystems.com/
Posted by LSI at 5:17 PM