To kick (something) around

Idiom: To kick (something) around; used as a verb 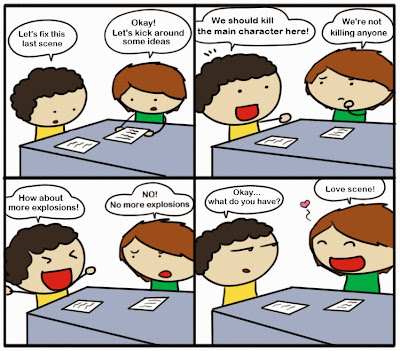 First Example:
Dawn: How is the screenplay that you're writing with Janet?
Jeff: Truthfully, we're kind of stuck. We can't settle on an ending.
Dawn: Oh?
Jeff: We've got a few ideas we're kicking around at the moment, but we haven't found anything we really like.
Dawn: Well, if you need help, I can kick some ideas around with you guys and give you an outsider's perspective.
Jeff: Actually, that might be helpful. Let me ask Janet what she thinks.


Meaning: To "kick (something) around" means to discuss or brainstorm. Usually, this expression is used when a person or group of people are trying to find a solution, as in the example above (where Janet and Jeff have been kicking around ideas for an ending, and Dawn offers to help). Notice that this idiom is separable, meaning it can be used with a noun in front of the idiom ("a few ideas we're kicking around"), separating the idiom ("kick some ideas around") or even after the idiom ("kick around some ideas" - not in example dialogue).