Idiom: friends in high places (used as a noun) 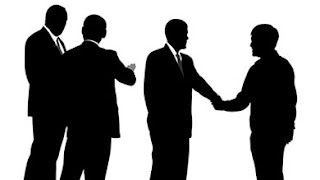 First Example:
Sandra: Did you hear that Ben got the promotion?
Donald: No way! I thought for sure you'd get it!
Sandra: Well, I don't have as many friends in high places.
Donald: What do you mean?
Sandra: Well, he has a few friends in upper management. Something tells me that helped him more than his qualifications...

Second Example:
Ally: Want to go to a big movie premiere tonight?
Cameron: Sure, but how are we going to get in?
Ally: Let's just say that I've got a few friends in high places.
Cameron: Like who?
Ally: That's not your concern.
Cameron: But seriously, who?
Ally: OK, fine. I used to babysit the producer of the film. His mom and my mom are friends, so when I heard he was making this movie, my mom called his mom, and she made him give me two tickets. Anyway, do you want to go with me?
Cameron: Sure! Do you have any embarrassing stories you can share about him?

Meaning: In the second example, Ally doesn't actually have a friend in a traditional position of power; rather, her mother knows the film's producer's mother. Often, the expression "friends in high places" is used like this, in order to suggest a person knows someone important but wants to keep the identity of that person secret.