Don't judge a book by its cover

Idiom: Don't judge a book by its cover: to not judge the quality or character of someone or something just by looking at them 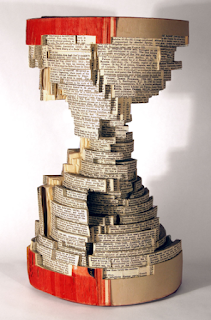 Context #1 – Students talking before the 1st day of class
Vanessa: Hey, Brad. Did you see the new English teacher? He looks so mean! I'm afraid to go to his class.
Brad: But you haven't even met him yet! Don't judge a book by its cover! Give him a chance before you form an opinion about him.
Vanessa: Hmmm. I guess you are right.
Brad: Besides, I've heard he is really funny! All the students who have taken his class say he is the best teacher they have ever had in English.
Vanessa: Wow, really? OK. I'll try his class and save my opinion for later.

Context #2 – Two friends at a party
Sami:  Hi Petra! Do you want to join us for lunch? We are going to “George's Cafe.”
Petra: Ewww, that place looks awful! It's so tiny and everything is so plain. Why don't we go somewhere else for lunch.
Sami: Don't judge a book by its cover, Petra. “George's Cafe” has the best sandwiches in town. All at a very affordable price.
Petra: Really? Wow, I guess I shouldn't judge it before I even try it.

Meaning: “Dont judge a book by its cover” is said when you cannot know what something or someone is like by looking only at that person or thing's appearance. In the first context, Vanessa has a negative opinion of the teacher based only on his appearance and that he looks “mean.” However, Brad has heard that the teacher is really good, so he encourages Vanessa to try the class and not base her opinion on just the looks of the teacher. In the second context, the place they are going for lunch is small and plain, so Petra has a bad opinion of it. However, it's actually a good place with the best sandwiches in town, so Sami encourages Petra to try it and then form an opinion based on the quality of the food.
Posted by Michelle at 9:00 AM