Idiom: To troll someone or something. Used as a verb (action) or noun (person). To make a  provocative online comment or posting with the goal of upsetting someone or eliciting an angry response from them. A person who posts to an internet discussion group, chat room, or blog with the sole purpose of disrupting it. 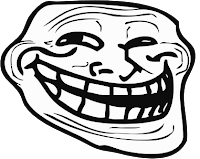 Context #1 – Two friends talking about a blog
Sal: Hey Patty, what's wrong? You look upset?
Patty: I'm so mad!! I write this blog about politics and that guy from our class, Reggie, keeps writing all these comments about Trump and how great he is.
Sal: Really?
Patty: Yes. All his comments support everything Trump says. It's crazy! No matter what I say, he just supports Trump more and argues more with me.
Sal: Well, I know Reggie and he is actually a Democrat and super liberal. I doubt he is serious about anything he is saying about Trump.
Patty: What? Do you mean he is just trolling me!
Sal: Yep. You have to admit that it's pretty funny to troll people about controversial politicians. He probably just wants to provoke you.
Patty: I never thought of that! Are you sure he doesn't like Trump? He seems so sincere when he writes comments on my blog.
Sal: Yes, I'm sure. That's what makes him such a good troll!

Context #2 – Two friends talking about Facebook
Tim: Hey, Michelle, what are you laughing about?
Michelle: Oh, hi Tim. I'm writing some comments about Hillary's recent speech on Facebook.
Tim: And why is that funny?
Michelle: Well, I'm turning her words from the speech around to make her look bad. My goodness, I had no idea her supporters would freak out so much!
Tim: You are so mean! You don't even care about the election or the candidates.
Michelle: Hahahaha! I know! But it's fun to see everyone get so upset over a few negative comments! I don't usually troll people like that, but I'm enjoying myself too much to stop.
Tim: Well, be careful. You don't want anyone to “unfriend” you because of a little trolling.
Michelle: You're right. I'll stop trolling....tomorrow!


Meaning: To troll means to purposely and cleverly provoke an angry or emotional response via the internet through comments and dialogue. However, trolling does not only mean making rude comments or statements. The most important part of trolling is to act like one truly believes what one is saying, even if it is completely outrageous. So the person who is being trolled should not know that he or she is being trolled by someone.